The Story of Our Renovation Project
In early 2016 we began to address our church’s need of interior renovation. We knew for years that this was needed, but we were also acutely aware that we didn’t have the funds. What changed? We are still, as ever, a fragile congregation, whose funds, in spite of all our best efforts, are never quite able to keep up; a congregation that sometimes receives unexpected gifts just in the nick of time, it would seem. But as far as finances are concerned, two things changed. First is the news that trustees and some members of the congregation met with a man, Mr. Bob Harrison, a drywall and plaster refinisher, who stated that the plaster in the nave is reparable, and that this work could be done in short, affordable steps, provided that we could set up our own scaffolding and planking, and do as much of the unspecialized work as we could, including especially cleanup; but possibly also even some painting. This was a breakthrough: the breaking of the project into steps prevents us from thinking it to be overwhelming and un-doable. We could  take as long as we need.

​So, since the voters’ approval on February 7, 2016 we began. We started with a small section about 20 feet by 20 feet. Bob repaired the plaster and painted it while the scaffolding was set up in that area. His rate is approximately $20-25 per hour, to which we added the cost of materials. Church members volunteered as the clean up crew.
By the summer of 2016 we had removed the pews for the major portion of repairing the ceiling. By October, we had them back in place, and at our Oktoberfest Mass we rededicated the nave. Phase I was complete.

​The second thing that has changed was a more fervent desire to get the job done. The dedication of this parish to her task of being a beacon of the Gospel in this place is worthy of note. It was that dedication that  brought us to the point where we determined our place of worship needed this remodeling.

Our members all pitched in. Volunteers were frequently and willingly answering the call to move pews, erect scaffolding, do cleanup work, help with painting, and be of assistance whenever needed.

Otis Anderson our head trustee was a continual mover and shaker behind the scenes, always seeing the people were ready and on time.

Steve Peart became the project manager in 2016 and personally contributed much effort toward the project.
Steve Kraklow, Allan Kraklow, Tom Wells, and many others contributed mightily to the project.
In 2017 we went to work on the balcony (Phase II), including the area where organ pipes had to be removed and replaced;  and the large front walls on either side of the chancel, with a new Alpha and Omega. Pastor worked with Sharon Hartz to finish this work for our Oktoberfest in 2017.
By the end of 2017 everything from the balcony to the front was completed, and the planning stage for  the balcony has begun in 2018 as we look to the renovation of the chancel. Sharon Hartz has been preparing a blueprint template on which we can sketch ideas and considerations.

The church also received a new roof by year's end, and the basement and its restrooms were painted and fixed up.
In the first half of 2018 we moved the communion rail to a place below  the chancel steps, and moved the Baptismal font to the center aisle. This was to assist the elderly as well as to open up the chancel area. The centrality of the font calls to mind the centrality of Holy Baptism in the life of the Christian. 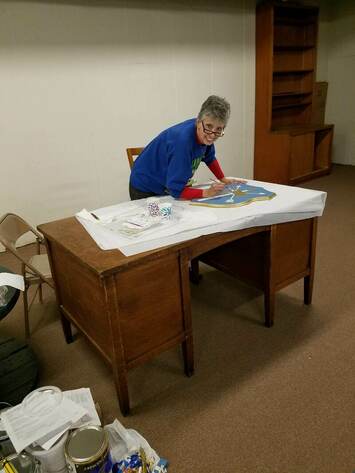 In the summer 2018 we received some special donations to help us with our project. Our final stage started in August with the exciting step of installing air conditioning. Since he duct-work is already in place—a foresight that was thankfully envisioned many years ago—the process of installing four central air units is not too complicated. For the first time in the building’s 115-year history, St. Paul’s has air conditioning.

What remained was for the chancel and the flooring to be completed. Since much of what we do is through volunteer labor, and since some of our volunteers are in the fields as farmers, we got back to the project soon after Oktoberfest, October 7-9, 2018.

Meanwhile twelve shields were purchased, on which Sharon Hartz painted the symbols of the twelve apostles. These shields were mounted in the Great Arch, which is the archway that is suspended over the chancel steps. This was to approximate what once graced the walls of this church many years ago. 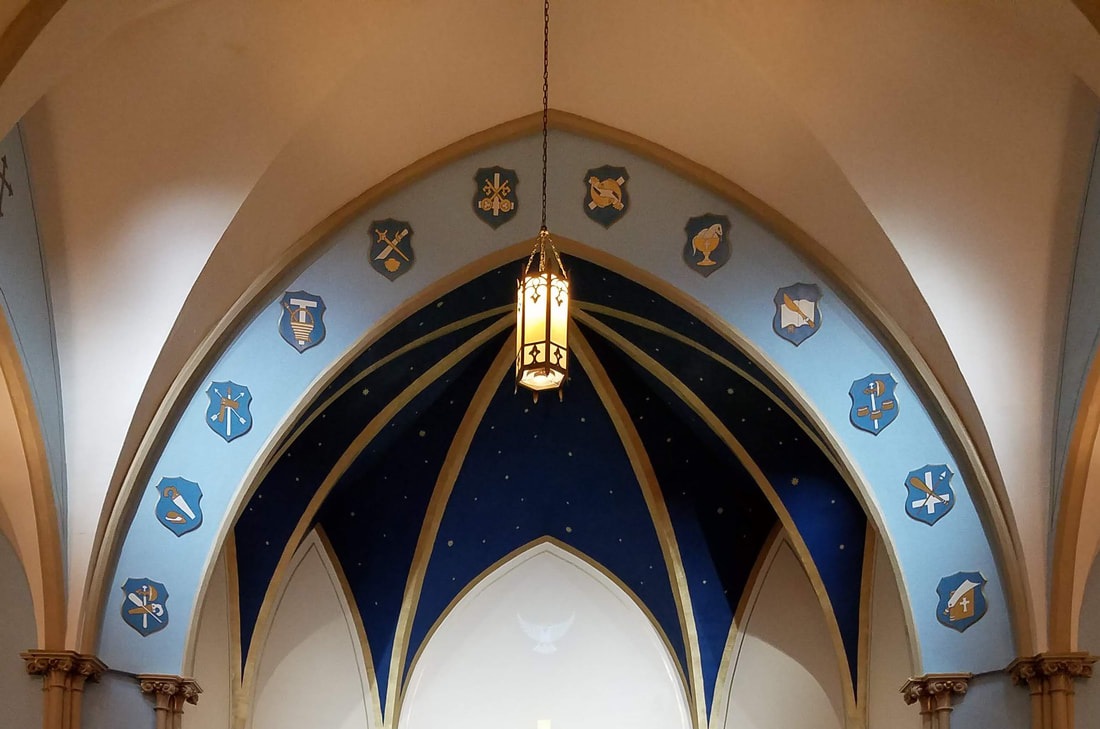 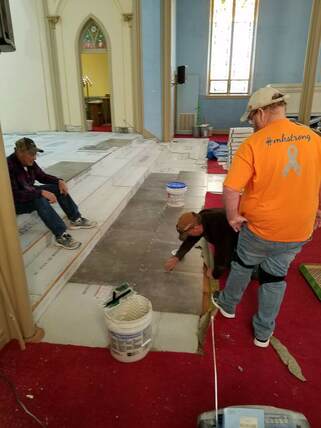 By February of 2019 the chancel painting was completed and the shields mounted. The entire project was finished down to the floor. Our artistic committee agreed upon tiling for our chancel floor, and by mid-March, the tiling was begun. While Bob Harrison got assistance from Tom Wells and Steve Kraklow, Pastor was busily mounting the new speaker system. It was a rush to the finish line, as we madly worked  to get back into the church just in time for Easter.

After Easter, we got some donations from Zion Lutheran church in Peoria, a church that closed early this year. They wanted to find a good home for their sacred items, so they gave us some linens and a beautiful marble Baptismal font.

The dedication of the renewed and remodeled chancel is scheduled for the opening service of Oktoberfest at 5:00 pm on Sunday, October 13th, 2019.